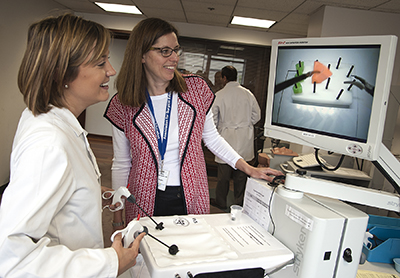 Dr Klingensmith, right, will be speaking at the FST conference on 21 October

The title for this year’s FST conference is Time vs Competency in Surgical Training. How would you define competency-based training?
To me, competency-based training means that we have a defined, measurable target to which we are training a person. I don’t mean necessarily globally, but we have dissected it down into individual units. For example, it’s perhaps an ability to assess a patient who comes to triage with an acute abdomen and we can effectively validate that patient and know what to do next based on what we find.
In the US, we are still far from having that sense of all the discrete units of learning and measurable understanding of work, but it’s a measure of competency that we really do need. We’ve started moving towards competency-based education, but it’s going to be a very long road and we’re just getting started on it.

When did the concept begin to gain traction in the US?
In January 2015, the American Board of Surgery made a unified commitment that we want to move in this direction. The US training system differs from other countries’ systems in that we have a board that sets certification standards, but doesn’t actually oversee the training process – that’s done by a separate body.
This means we’re having to deal with the political battles of getting those who oversee training to form an agreement. For the most part, we have conceptual agreement, but it’s been a matter of sharing ideas and it’s been a rather ponderous and deliberate process to this point.

Are those the only blocks to progressing competency-based training?
In the US, the trainee workforce truly is a workforce that serves a manpower need for the care of patients in academic centres. So it’s sometimes very difficult to separate the actual work from education; that’s one barrier. The other issue is that, as we have delved deeper into competency-based education, it’s clear that it requires much more faculty training and time, for which there is no current payment method. Clinicians are paid based on the number of patients cared for, not for providing education. So we don’t yet have a clear idea of how we’re going to be able to incentivise our faculty to do this additional work.

is the debate over the length of training as contentious in the US as it is in the UK?
In the US, the pressure is coming from trainees to make their training shorter, mainly in the form of greater efficiencies. We’ve already had a decrease in our working hours, but there’s a feeling that we need to gain further efficiencies and have fewer years on the task of training. Many trainers are not convinced, but the trainees would like it if they could be finished in fewer years.

Do ‘entrustable professional activities’ (EPAs) have anything new to offer in surgical training?
There are some specialties in the US that are beginning to use EPAs successfully in residency, so there is a lot of interest in using them as models for competency-based education. The Netherlands seems to be furthest ahead in using EPAs, so the American Board of Surgery is to hold a meeting with Dutch experts later in the year.

Should trainers be assessed using the same systems as trainees?
We should be aspiring to that, although it’s complicated. We would need to devise systems in which to do that, but I think we owe it to our trainees to demonstrate that we as trainers are competent at what we do. Although providing training is a passion for many doctors, we’re not necessarily trained to do it and we rarely get feedback on how well we do it. There really should be a formal feedback process, but I think the steps we would need to take to operationalise that in a systematic way are unknown.

Is there a culture in surgery where it is assumed a consultant will be a good trainer?
Historically and culturally in medicine, those who stayed in academic centres had an interest in teaching and so they say the system worked. However, there’s so much more we know about sound educational principles now and we owe it to ourselves to understand that science and apply it. But it’s also true that we’re in a much more complex environment now than we ever were. For example, there’s been an explosion in simulation technology.
There have been a lot of changes that have eroded the prior system and I don’t think we’ve done a good job of acknowledging and responding to change and making certain that we are providing the best possible education for our trainees.

What roles or functions does the Association for Surgical Education (ASE) have in supporting surgical trainers?
The ASE was formed in 1980 as a professional organisation for surgical trainers. I undertook an ASE-sponsored surgical education research Fellowship about 15 years ago, which resulted in a publication. After that, I became gradually more involved in ASE activity.
It’s a place where there are opportunities for training development or faculty development, where individuals can learn the techniques of educational scholarships. We have an annual meeting where we present and share our educational scholarships and we also have a grant programme where we fund educational research projects.

Is there anything like the FST’s Standards for Surgical Trainers in the US?
There are no set standards as yet. The ASE runs a voluntary system called the Academy of Clerkship Directors for doctors who oversee undergraduate training. There’s a set of standards that must be met before doctors can join.
In graduate medical education, there is an expectation, but not a requirement, for those in supervisory roles to attend training programmes. There is a short course offered for surgery through the Association of Programme Directors of Surgery. It’s undoubtedly helpful and practical; many trainers take advantage of it because it does make their subsequent work easier, but it’s optional and does little to further one’s understanding of educational principles.

Mary Klingensmith MD is President of the Association for Surgical Education, Distinguished Professor of Surgery and Vice-Chair for Education at Washington University School of Medicine, St Louis, US.

Professor Klingensmith will be speaking at the FST Annual Conference in Edinburgh on 21 October 2016. Click here for booking details.